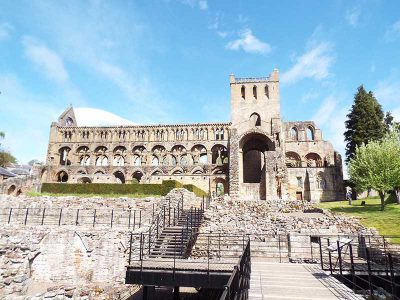 On this Scotland tour, we visit the mysterious 15th century Rosslyn Chapel. Steeped in myth and legend including tales of the Knights Templar and Dan Brown’s ” The Da Vinci Code”. Experience the beautiful valleys and rivers of the Scottish Borders, combined with ancient ruins including Melrose and Dryburgh Abbeys.

On this Scottish Borders Tour, your personal driver/guide for the day shall meet you at reception at 9 am. From your hotel, we travel to the mysterious 15th century Rosslyn Chapel. The history of the chapel goes back to 1446 when William St Clair, ( Prince of Orkney) laid the first stone. Rosslyn has long been connected with myth and legend, including tales of the Knights Templar and Dan Brown’s ” Da Vinci Code”

After a tour of Rosslyn, we journey south into the heart of the Scottish Borders to the magnificent part-ruin of Melrose Abbey. Founded in the 12th century by King David the First, the Abbey’s chapter house holds a lead container believed to be the embalmed heart of King Robert the Bruce. Close to the small town of Melrose is Abbotsford House, former home of Sir Walter Scott, one of Scotland’s most prolific novelists and poets.

Moving on we then travel the beautiful secluded grounds of Dryburgh Abbey, final resting place of Sir Walter Scott. Next, we travel Scott’s viewpoint a fantastic panoramic vantage point of the rivers and valleys below. It’s then onto the impressive 15th century Smailholm Tower. The walk from the car park to the tower can be steep in places, however, you are rewarded with fantastic views of the surrounding countryside.

Continuing on, we now travel to the small market town of Kelso to view it’s ruined Abbey and the magnificent Floors Castle, Scotland’s largest castle and home of the Duke of Roxburghe. From here we travel north and, time permitting, visit Thirlestane Castle, before making our way to Edinburgh.

View our other Day Tours from Edinburgh