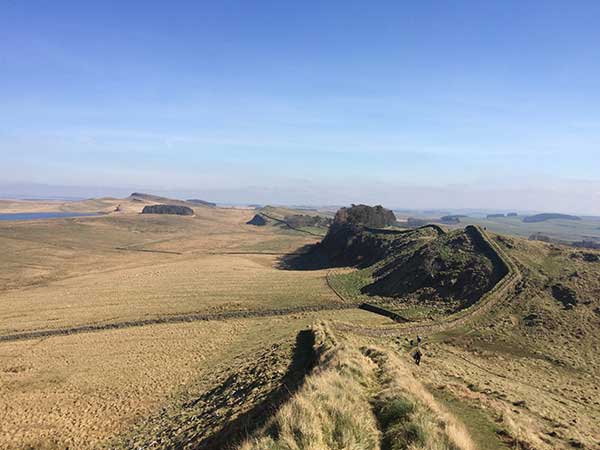 Our Hadrian’s Wall and Viking Coast Tour from Scotland is packed with beautiful landscapes and fascinating history.

This 2-day tour crosses the Scottish Border into the north of England. There, you’ll visit the magnificent Hadrian’s Wall and the captivating Northumberland Coast.

This exciting tour will leave you with memories that will last a lifetime.

On the first day of your Hadrian’s Wall tour from Scotland, we’ll set off south towards the English border.

We’ll travel through the picturesque hills and rolling valleys of the Scottish borders. Photo stops along the way will include Melrose Abbey, a magnificent ruin dating back to 1136. We also visit the Romanesque Jedburgh Abbey of the same period.

We then travel along the open moorland of the Cheviot Hills as you cross from Scotland into England.

Here, we will be an opportunity to explore the truly awe-inspiring Hadrian’s Wall. A world heritage site and one of the most important monuments built by the Romans.

Here, you can visit the Housesteads Roman Fort. The most complete example of a Roman Fort anywhere in Britain. Or enjoy a 3-mile walk along Hadrian’s Wall (approximately 2 hours).

To end your tour, we’ll make our last stop of the day at the impressive Roman Fort at Vindolanda.

You will spend the evening in the pretty, bustling market town of Hexham.

Day 2: Tour of the Viking Coast

On day two we have your tour of the ‘Viking Coast’. We’ll begin by traveling along the Northumberland Coast. One of the UK’s most outstanding areas of natural beauty. This cost is often referred to as The Viking Coast, as it is the location of the first Viking invasion of Britain.

Today, you’ll visit Alnwick Castle, the second largest inhabited castle in the country. You may know Alnwick Castle better as Hogwarts. The fictional school of magic in the first two Harry Potter films.

Also today, you’ll see the stunningly beautiful Holy Island of Lindisfarne. One of the most important centers of early English Christianity.

We’ll also pass through St. Abb’s, a picturesque fishing village on the Berwickshire coast. From here, we will return to your base in Edinburgh or Glasgow through the charming towns of East Lothian.