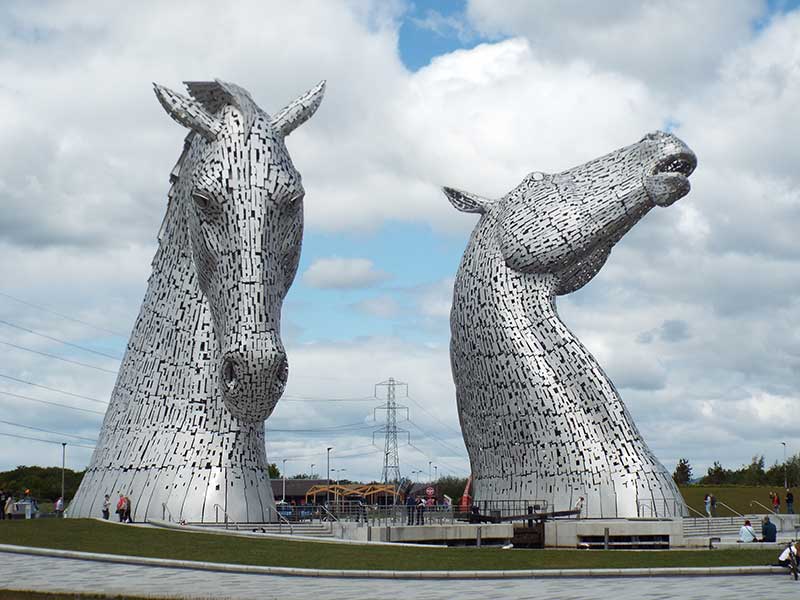 The Kelpies, The Falkirk Wheel and Stirling Castle. Day Tour from Edinburgh

This day tour from Edinburgh offers you the unique opportunity to visit and marvel at incredible wonders of design and engineering. Combined with a tour of the magnificent 15th century Stirling castle. This is one of Scotland’s most formidable castles and favourite royal residence of the Stuart monarchs.

On this day tour we visit the iconic Kelpies, the tallest equine horse-head sculptures in the world. These impressive 30 metre high sculptures are beautifully designed by Scotland’s Andy Scott. They hark back to the history and heritage of the working heavy horses. Pulling tirelessly heavy laden barges along the Clyde and Forth canals. The size and scale and design of these impressive sculptures can only be appreciated when standing close to them.

Moving on, we now head to the Falkirk Wheel, the worlds first and only rotating boat lift. This exceptional feat of engineering was designed to connect the Forth & Clyde Canal with the Union Canal and was opened in 2002 as part of the Millennium link project.

Continuing on we travel to the magnificent 16th century Stirling Castle, steeped in ancient history and witness to many a bloody battle against invading armies during Scotland’s  ” Wars of Independence”.  As we arrive at the castle esplanade, you shall will have plenty of free time to explore the ancient walls and grounds around the castle. These include the magnificent Royal Palace, the Chapel Royal and the Great Hall. The castles’ impressive kitchens and high turrets are also well worth exploring.

Leaving the castle esplanade we will visit the historic Stirling Bridge. This is the site of  Scotland’s national hero William Wallace’s victory against the forces of Edward 1  in 1297. We then visit the National Wallace Monument, built and completed in 1869 to commemorate the battle. From here we then make our way back to Edinburgh, where we sadly say our farewells.

Highlights of your day tour from Edinburgh include: