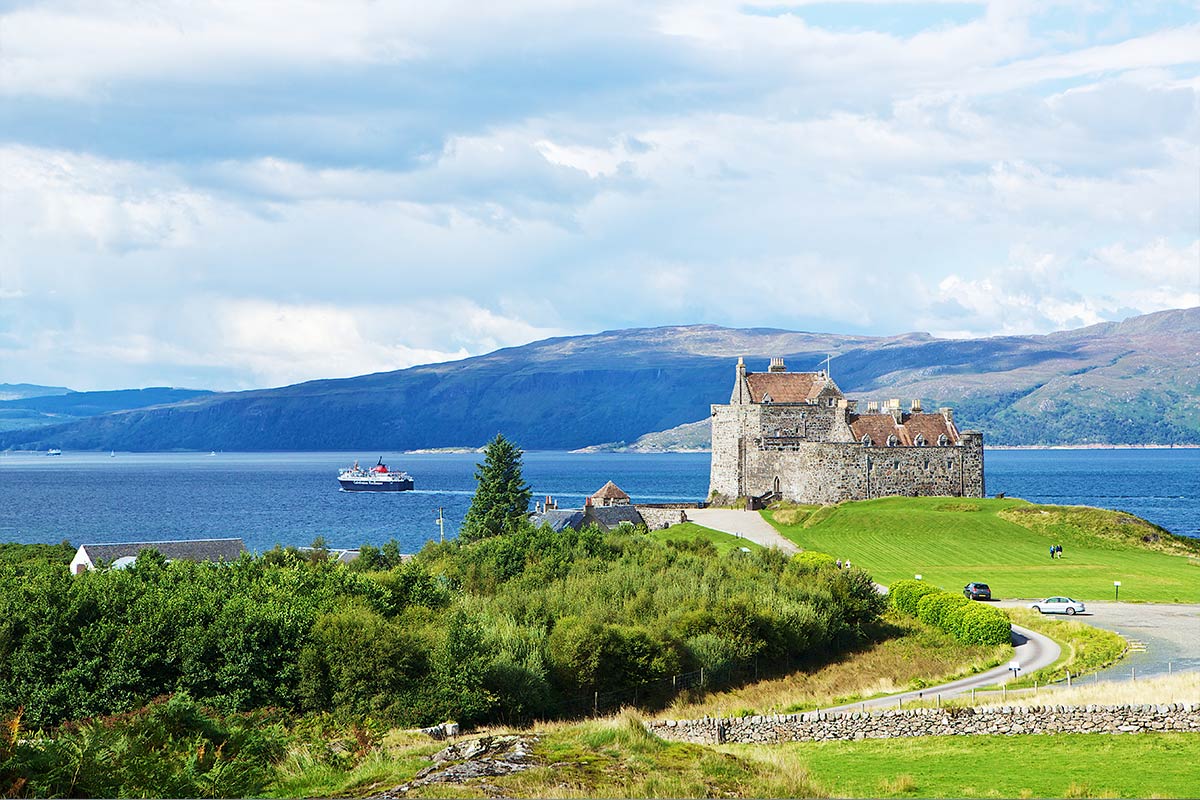 Scottish Castles – The hidden gems of the West of Scotland

Scottish Castles – The hidden gems of the West of Scotland.

Below is a small selection of the incredible Scottish castles found on the west coast of Scotland. From the Isle of Skye to the islands to hidden castles on the mainland, there is something for everyone.

Castle Stalker is a picturesque castle surrounded by water located 25 miles north of Oban. The castle is privately owned but we do run a limited number of tours each year – contact us for details.
Castle Stalker – in the Gaelic, Stalcaire, meaning Hunter or Falconer – is believed originally to have been the site of a Fortalice (a small fortified building). It belonged to the MacDougalls when they were Lords of Lorn, and built around 1320. The MacDougalls lost their title after their defeat by King Bruce at Brander Pass in 1308 but regained it for a period after 1328. In about 1388 the Lordship of Lorn passed to the Stewarts, the lands including Castle Stalker.
Learn more on one of our Scottish castle tours.

The ruined Castle Tioram (pronounced Cheerum) is locatedon the rocky tidal island, Eilean Tioram (the Dry Island), where the waters of Loch Moidart & the River Shiel meet.
The castle can be reached on foot across the tidal causeway, but there is no access to the interior because of the risk of falling masonry.
Though hidden from the sea, the castle controls access to Loch Shiel. It is also known to the locals as “Dorlin Castle”

The position of Duart was well chosen, it is sited on a high crag at the end of a peninsula jutting into the Sound of Mull. It commands the channel between Mull and the mainland, entrances to Lochs Linne and Etive and the neck of the Firth of Lorne as it meets the Sound of Mull.

The Keep was built by Chief Lachlan Lubanach Maclean and on the vunerable landward side is 29 feet (9m) high and 10 feet (3m) thick. The walls facing the sea are less thick ranging from 5 to 9 feet (1.8m to 2.4m).

Kilchurn Castle was a fortress, a comfortable residence and later a garrison stronghold, and contains the oldest surviving barracks on the British mainland. Its five-storey tower house dominates the complex, with a lower hall, courtyard and barracks below.
Kilchurn Castle was built in the mid-1400s, and it remained the base of the mighty Campbells of Glenorchy for 150 years. After the first Jacobite Rising of 1689, Kilchurn was converted into a garrison stronghold, but was abandoned by the end of the 1700s.

Inveraray Castle is the ancestral home of the Duke of Argyll, Chief of the Clan Campbell and the iconic, must-see visitor attraction on the West Coast of Scotland.
An Inveraray Castle has been standing on the shores of Loch Fyne since the 1400s, although the impressive castle we know today was inspired by a sketch by Vanbrugh, the architect of Blenheim Palace and Castle Howard in the 1700s.

Eilean Donan is recognised as one of the most iconic images of Scotland all over the world. Situated on an island at the point where three great sea lochs meet, and surrounded by some majestic scenery, it is little wonder that this Scottish castle is now one of the most visited and important attractions in the Scottish Highlands.
Although first inhabited around the 6th century, the first fortified castle was built in the mid 13th century and stood guard over the lands of Kintail. Since then, at least four different versions of the castle have been built and re-built as the feudal history of Scotland unfolded through the centuries.